Many couples are opting for infinity rings, not only because of their appealing design and make, but also because of their meaning and significance. If you have heard about this famous ring, but do not know what it exactly represents, then Fashionhance will tell you what does an infinity ring symbolize, and if it would be a good choice for you and your love. 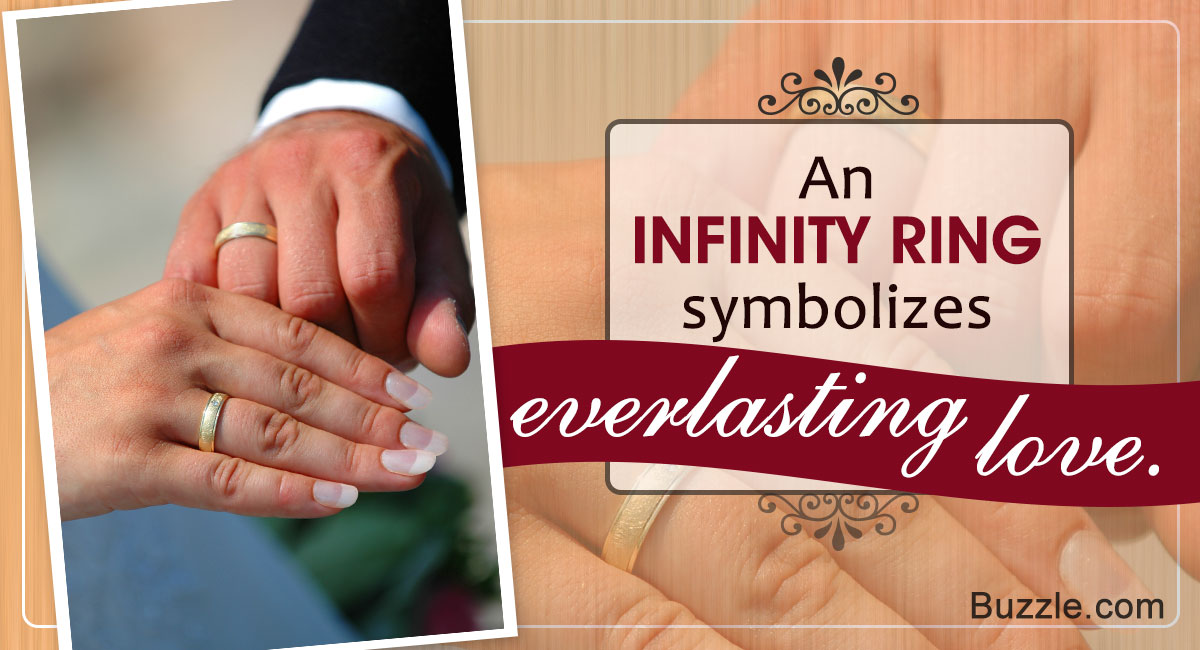 Many couples are opting for infinity rings, not only because of their appealing design and make, but also because of their meaning and significance. If you have heard about this famous ring, but do not know what it exactly represents, then Fashionhance will tell you what does an infinity ring symbolize, and if it would be a good choice for you and your love.

Most people get confused between the two, often mistaking them to be the same. While the symbolism of both rings is almost the same, the difference lies in their make. Unlike infinity rings where the infinite design stays at the central location, eternity bands have the design throughout the ring, completely encircling the finger.

Giving a ring to your love symbolizes a lot in itself! However, these days couples don’t just settle for any ring. Gold, in itself, is not unique anymore, diamonds―though fascinating―have become highly common. Now, couples are looking for something beyond aesthetic and monetary value, something that has a deep meaning, a symbolism in the true sense of the word.

Perfectly fitting this requirement is the infinity ring, which, as the name symbolizes, means an infinite relationship with the person to whom you choose to give this ring. With relationships becoming more and more unstable, and promises proving to be futile in the long run, a ring worn with a belief that it will, in a way, remind each other of the commitment and love they have for each other, is truly essential. The following section will give an in-depth understanding of what this ring signifies.

Meaning and Symbolism of an Infinity Ring

The word ‘infinity’ is derived from the Latin word infinitas, which translates to ‘the state of being without finish’, or in simple words, something that never ceases to exist. This is one reason why this ring is so popular among lovers, because it reflects that they share a love bond so strong that no matter what comes, it will never break or never cease to exist. If you pay attention to the meaning of the ‘infinite’ symbol, there are various beliefs associated with the same since time immemorial.

You must have noticed for sure that this symbol resembles a lot to the number 8. In fact, it is 8, just a little narrower. The number 8 is considered to be extremely auspicious in China. Even in Christianity, it represents resurrection and regeneration.

If you observe carefully, it is written in a continual pattern which has no beginning and end. Also, if you pay a close attention to the way we write this number, you will observe that, it begins from the top, goes all the way to the bottom, and comes back to the highest point again. This symbolism also gives infinity rings an interesting meaning―irrespective of the ups and downs in life, there will be no end to this bond, and finally, it will reach the heights of success and love.

It is believed that the Egyptians were the first one to use the ancient symbol, Ouroboros, which was later used by other cultures as the symbol of infinity. The word is derived from the Greek words, ‘oura’ meaning tail, and ‘boros’ meaning eating. Yes, the symbol is nothing but that of a serpent eating its own tail. Serpents are representatives of reincarnation.

Their periodic skin-shedding has been viewed by many as a sign of rebirth through death, or to be more specific, a new beginning after an end, which technically means that there is no end at all! The alchemists of the past also considered this to be a sign of unity. Therefore, a ring bearing the infinity sign also reflects unity among the wearers.

Who doesn’t know the most well-known patterns that symbolize eternity―the Celtic knots! The characteristics of these knots are the same as the infinity symbol, which makes these patterns very popular in jewelry making, especially the ones made for couples. In fact, most of them incorporate the infinity symbol around the famous Claddagh rings, which are the epitome of symbolizing love. Generally, they consist a heart that represents love, and crown that symbolizes loyalty, and two hands holding the heart that represents friendship―the true definition of love, we must say!

If you and your mate share an extremely strong bond, a connection that seems far beyond this life, then this ring is a perfect choice to express your relationship. Also, if you are one of those lucky couples who think that they are ‘made for each other’ in the true sense of the phrase, and within a few months or years, it seems that you have known each other since time immemorial, there is no better ring to symbolize this. May your love grow and continue to thrive each day, and forever.