A ring is usually worn for a purpose. Similar to rings worn in other fingers, wearing a ring in the thumb has many implications. Right from being a status symbol to determining your sexual orientation, the significance of thumb ring is very interesting and contradictory.

A ring is usually worn for a purpose. Similar to rings worn in other fingers, wearing a ring in the thumb has many implications. Right from being a status symbol to determining your sexual orientation, the significance of thumb ring is very interesting and contradictory.

An Egyptian mummy of a woman wearing a thumb ring was found which proved that thumb rings dated back to the ancient Egyptian era.

There has been a lot of speculation about the meaning of a thumb ring due to the positive and negative connotations associated with it. In modern times, it is believed that thumb rings signify your sexual orientation. However, apart from it, it symbolizes many other virtues and merits.

Meaning and Symbolism of a Thumb Ring

In earlier times, thumb rings were used only by upper class men to signify the social status of the wearer. Higher the status and the rank of the wearer, more ornate and heavy his thumb ring was.

According to modern concepts, women usually wear thumb rings to signify their independence and freedom. For a very long time now, it has been believed that thumb rings are associated with free will, independence, and will power. One of the related fun facts is that the bigger the ring, greater the freedom he is trying to express.

Nowadays, women wear thumb rings for fashion purposes, than for its meaning.

In some parts of the world, since ancient times, a woman wearing a thumb ring in her right thumb symbolized that she was open to sexual experimentation. There is neither proof conforming this nor it is applicable anymore. Off late, there is widespread hearsay about thumb rings and their relevance with the wearer’s sexual orientation. It is rumored that these rings are worn only by homosexuals. A person who wears a ring in his right thumb is said to be into a same-sex relationship.

As mentioned above, an Egyptian mummy of a woman wearing a thumb ring was discovered that proved that these rings date back to the ancient Egyptian era. Even in ancient times, these rings signified different things. They were usually worn to ward off evil spirits or diseases. If worn for this reason, they were worn by both, men and women. Secondly, women would wear their dead husband’s ring on their thumb to preserve his memory. Reference of thumb rings is also found in Shakespeare’s plays (“My own knee? When I was about thy years, Hal, I was not an eagle’s talon in the waist. I could have crept into any alderman’s thumb-ring” Henry IV Part 1, Act 2, Scene 4, Page 14). In the medieval times, thumb rings symbolized love, commitment, will power, etc. However, as time passed, the significance of these rings changed drastically.

Thumb rings are available in a variety of sizes, styles, and patterns. They are made from a variety of material ranging from stone, plastic, ivory, metal to sterling silver or white gold or even 10K yellow gold. Engraved rings made of metal are specially popular among youth. With myriad options in styles, sizes, and the metal used, thumb rings are very popular among men and women as fashion accessories. You can either go for a studded, carved, or an engraved one. You will definitely find something that suits your budget.

One is sure to get baffled with the contradictory symbolism associated with the thumb ring. You can choose not to be bothered, as the significance keeps on changing with the changing trends. You can buy yourself a beautiful engraved ring, and wear it as jewelry or a fashion accessory if you really fancy it. Good luck!

Disclaimer: The aforementioned meanings are NOT the views of the writer, but, a compilation of the popular symbolism associated with the thumb ring. 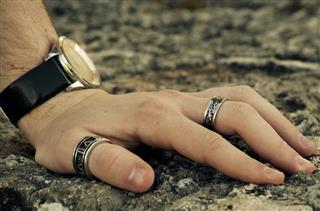 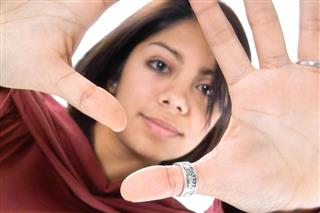 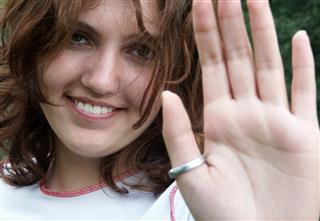