Old Mine Cut Vs. Old European Cut Diamonds: Can You Choose One?

Nowadays, diamonds cut in antique styles are regaining their prominence in the market. In this article, we shall discuss the difference between Old Mine Cut vs. Old European Cut diamonds, two of the most popular cutting styles that were used during the early 19th century.

Home / Uncategorized / Old Mine Cut Vs. Old European Cut Diamonds: Can You Choose One? 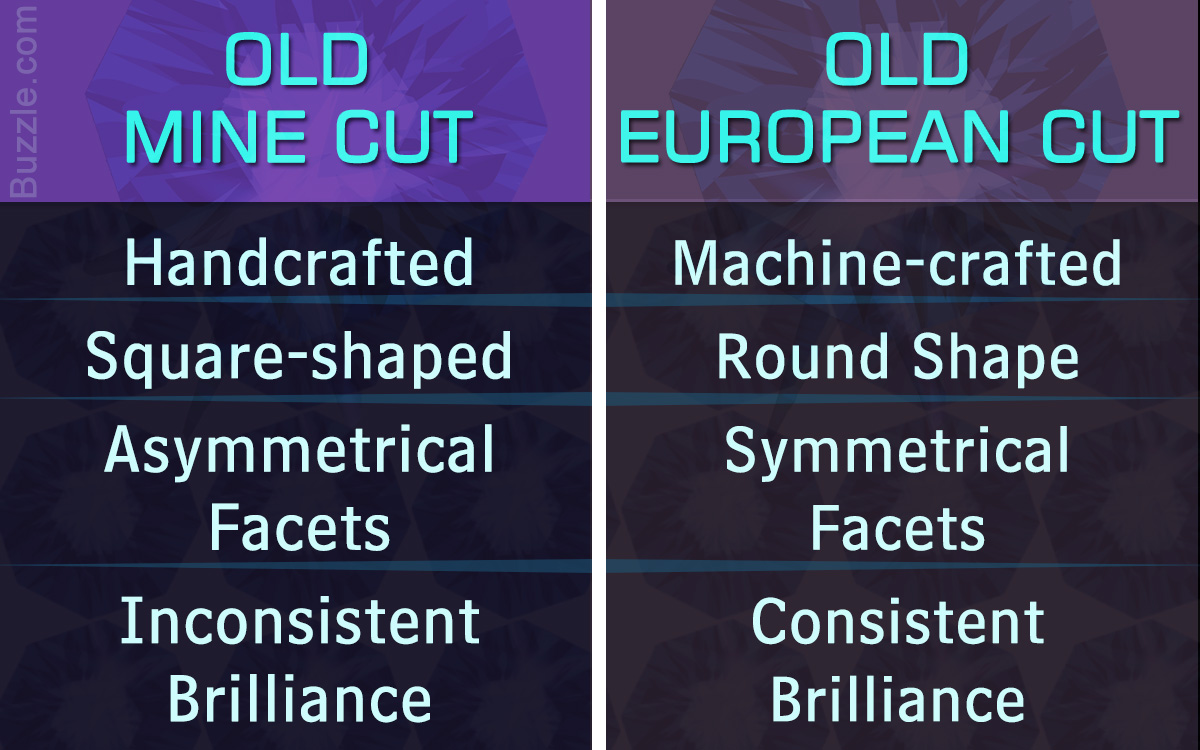 Nowadays, diamonds cut in antique styles are regaining their prominence in the market. In this article, we shall discuss the difference between Old Mine Cut vs. Old European Cut diamonds, two of the most popular cutting styles that were used during the early 19th century.

The largest diamond to have been mined weighed a whopping 3,106 carats (around 621 g or 1.3 lb). It was named the ‘Cullinan’, and was cut into nine polished stones, all of which are now a part of the Crown Jewels of England, which reside at the Tower of London.

The earliest mined diamonds were simply polished and slightly refined to the stone’s natural octahedral shape. Over time, with the advent of improved technology and cutting tools, new shapes and appearances gained popularity. One could now give diamonds a flat face, facets, and proportions to reflect light better.

The most popular of these styles were the Old Mine Cut, otherwise called miner’s cut diamonds, and the Old European Cut. Before we go into the differences between these two cutting techniques, we first need to understand a few simple terms used describe a diamond’s appearance.

The Old Mine Cut was used to shape diamonds throughout the 18th century, when most of the stones were found in the old mines of India and Venezuela. It was only in the late 1800s that diamond mines were discovered in the European colonies of Africa. By this time, technology had improved, and motorized machinery helped in creating the more accurate and symmetrical Old European Cut.

In the early 18th century, all diamond cleaving, bruting, polishing equipment, and processes were powered only by the man shaping the stones. As a result, although miner’s cut diamonds were beautiful to look at, they were far from accurate in their dimensions, and the end result of each stone could vary greatly. Towards the end of the century, the invention of a steam-powered bruting machine and a power-driven circular saw enabled diamond cutters to create the circular and relatively symmetrical Old European with significantly lesser wastage.

Due to the lack of technology, Old Mine Cuts were usually made large and chunky to avoid weight loss, and most had a squarish shape with rounded edges and non-uniform facets. On the other hand, powered machinery in the early 19th century gave prominence to the rounded Old European stones. Although they were still chunky, the stones were more uniform in shape and the facets were symmetrical.

The table of Old Mine Cut stones were relatively smaller to that of modern stones, i.e., 30 – 40% smaller. However, the table of most Old European Cut diamonds were even smaller, approximately about 60% smaller than that of a modern diamond.

The crown of Old Mine Cuts were large in comparison to today’s standards. However, the size could vary with each stone. Most Old European stones had smaller crowns compared to the Old Miners, but were still quite large.

The pavilion on most Old Mine Cut diamonds were deep with uneven facets. On the other hand, the pavilions on Old European diamonds were quite short, only 50% of the diamond from the girdle to the culet, compared to 85% in modern diamonds. The facets on the pavilions were more or less even.

Old Mine Cut diamonds had large open culets, which were more often than not off center. Because the Old European diamonds were more symmetrical, the culets were usually toward the center, and were comparatively smaller too.

Both types of diamond cuts were crafted mainly to beautifully reflect candle light, as electric lighting was a very rare thing at the time. While most Old European diamonds of the same size and quality reflected light with similar brilliance, the same cannot be said for Miner’s Cut diamonds. Inconsistent results of handcrafting these diamonds meant that some stones would shine brilliantly, while others would be significantly dull.

Until a few decades ago, both the Old Mine Cut and Old European Cut diamonds were being reshaped to modern standards to increase saleability. Recently however, the rarity of these styles of cuts has reversed the trend, and any kind of modification done to these stones might depreciate their value. Both styles can get high prices, depending on the weight and quality of the stone, and original Old Mine Cut and Old European Cut diamonds from the 18th and 19th century fetch much better prices than modern reproductions.

Ultimately, the beauty of these diamonds came from the fact that, at the time, these stones were not graded or scaled with labels and certificates. Visual beauty was the only measure, and the ultimate goal of the diamond cutter was to extract the brightest and most beautiful stone from the rough.