The words 'France' and 'fashion' have forever been hand-in-hand. Some of the world's best fashion designers have been Frenchmen and Frenchwomen. We take a look at some of the French fashion designers who later became famous names in the fashion industry. 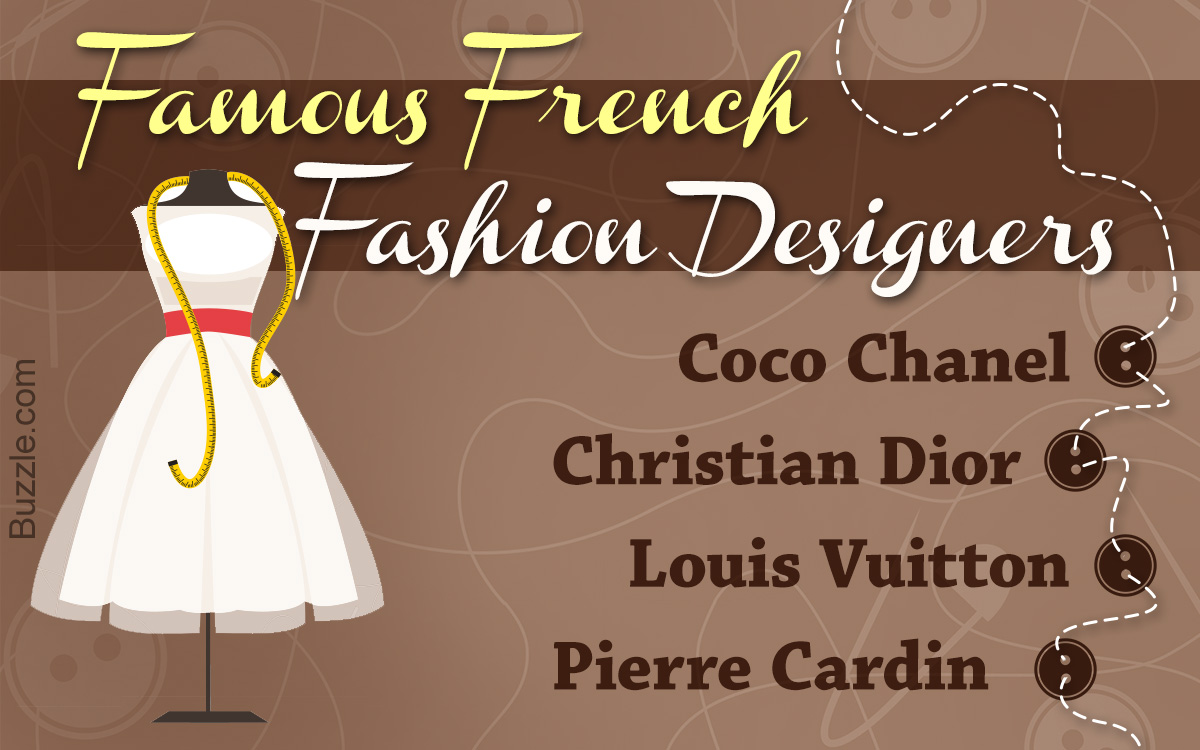 The words ‘France’ and ‘fashion’ have forever been hand-in-hand. Some of the world’s best fashion designers have been Frenchmen and Frenchwomen. We take a look at some of the French fashion designers who later became famous names in the fashion industry.

Paris is often labeled as the unofficial capital of the fashion world. Fashion designers, models, stylists, and in general, all fashion enthusiasts, flock to France to see and experience the latest designs in the world of fashion. The contribution of France, and in particular, French designers, towards the fashion industry has been phenomenal. Here we showcase some of the legendary French names in the world of fashion designing.

The three brothers started a line of clothing for both men and women, with the concept of dressing the pair instead of picking one over the other. Their chic and offbeat idea draws inspiration from rock, vintage, and the British.

She is a 28, studied fashion design at ESMOD (École Supérieure des Arts et techniques de la Mode), and has her own knitwear brand that become famous across the globe. Adopting her cultural heritage in her work, Lemoîne has built a bridge between the ancestral knitting techniques with the modern fashion world.

Under his company, Courrèges first launched his signature designs of a little white dress and trouser suit. In 1964, the ‘Space Age’ collection was launched where geometric shapes and designs were given center stage. Later in his career, Courrèges also dabbled in launching a new perfume.

She has assisted Nicolas Ghesquière and Christian Lacroix, after which she started her own creation where she combined practical wares that looked edgy and elegant. Jarrar uses minimalist palette of colors, but has an excellent reputation of cutting and tailoring of clothes.

Considered one of the best fashion designers of France, Christian Dior was inclined towards art right from his childhood. He started his career in fashion, working as an assistant designer to Robert Piquet. Post World War II, Dior rose to global fame with his new revolutionary design which was appropriately named the New Look. Dior dominated the fashion world until his death in 1957. He is credited for launching and commercializing French fashion on the world stage.

Lacroix is known for entering and reviving the Haute Couture industry at a time when other streams of fashion were threatening to overpower its supremacy. Lacroix, best known for his exotic range of designer clothing and his modern creation of the puffball skirt, is quite a favorite among Hollywood celebrities including the likes of Christina Aguilera and Nicole Kidman.

World famous for his signature shiny, red-lacquered soles in the footwear, Louboutin was the one who brought stilettos back in style around the 1990s. The reason behind this was to “make a woman look sexy, beautiful, to make her legs look as long as [he] can”.

Coco Chanel’s tryst with fashion began as a seamstress during her childhood. She later moved on to selling ladies’ hats, after which she launched her own line of clothing and the famous perfume ‘Chanel No. 5’, which is popular even today. Chanel’s claim to fame, among other things, is the novel cardigan jacket that she presented to the world. The legendary little black dress, which later became a must-have in every woman’s wardrobe, also happens to be one of Chanel’s signature designs.

After establishing Givenchy in 1952, Hubert de Givenchy debuted featured long skirts and tailored blouses. Following this, his next collection included elegant evening gowns, feminine hats, and tailored suits. However great of a success, in 1981, the label was split where Veuve Clicquot took over the perfume line and Louis Vuitton Moët Hennessy (LVMH) took over the fashion department. Currently, LVMH OWNS Parfums Givenchy too.

Even though Marant had launched her brand in 1990 under the name ‘Twen’, she changed the name to ‘Isabel Marant’ in 1994. The original clothing line consisted of jerseys and knitwear, today, the brand is known for its footwear as well. By 2000, Marant also included ‘Etoile’ to her brand that provides affordable and casual wares worldwide.

Do you remember Madonna’s infamous conical bras in her 1990s Blond Ambition tour? If you remember that, then knowing Gaultier is not difficult. Gaultier has always drawn influence from edgy street and punk styles, which has helped him create quite a name for himself.

An iconic name in the fashion industry, Louis Vuitton was hired by Napoleon’s wife to be personal box-maker and packer. Giving him a royal and elite clientele, Vuitton would offer his services to whomever required them. The label was founded in 1854, today, Michael Burke is the chairman and CEO of the company, whereas Kim Jones is the lead designer of menswear and Cesar Rubio is the creative director.

Drawing inspiration from art, music, and films, Simoëns has translated his ideas into his collections where every piece has a story to tell. Impressed with his work, in 2013, LVMH backed his fashion house financially, securing Simoëns’ reach to the global fashion market.

Fashion designers by profession and a couple in real life, Klère and Alary are taking the fashion industry by storm. Their 2013 Fall/Winter collection had ‘vibrant’ black and white wares that proved that you don’t need an array of colors to showcase your true talent. Their label, Dévastée, portrays a cool urban vibe that is becoming quite popular not just in France, but also worldwide.

Palona Picasso started her career in 1968 as a costume designer in Paris. By 1971, she started working for Zolotas, a Greek jewelry company; this was after Yves Saint Laurent had approached her to design accessories for one of his collections at the time. By 1980, Picasso was designing jewelry for Tiffany and Co.; and later on, launching her own brand.

Another well-known name, Pierre Cardin shot to fame mainly due to his innovative and space-age designs. Pierre had an affinity for geometry and it reflected in many of his designs. Pierre Cardin came into the limelight when he launched his new creation, The Bubble Dress. He is also credited for being the first fashion designer to launch a unisex range of clothing, as well as the concept of street fashion.

Hermès, a household name in France, is fondly referred to as the ‘grand-daddy’ of all French fashion and luxury labels. It was started by Thierry Hermès way back in 1837 and was initially into the business of manufacturing horse saddles and harnesses. Over the years, Hermès has grown substantially, establishing its stronghold in a wide range of businesses such as designer boutiques, world fashion, home decor, fashion jewelry, handbags, shoes as well as internationally known fragrances. Hermès is credited with having introduced the revolutionary concept of the zipper to France, which in due course of time, became a rage all over the country. Today, this brand boasts of an elite and celebrity clientèle which includes the likes of Madonna, Nicole Kidman, and Elle Macpherson among others.

Born and brought up in Algeria, Yves Saint Laurent moved to France during his late teens to pursue art and fashion. Initially, he began working under the legendary Christian Dior and later progressed to becoming the art director of the firm, following Dior’s untimely death. Saint Laurent eventually launched his own line of fashion clothing and is credited with innovative creations including the smoking suit, see-through blouses and the iconic jumpsuit which had a die-hard loyalist in musician Elvis Presley. Yves Saint Laurent continued to rise up the ladder of success and eventually became known as one of the best fashion designers the world has ever seen.

Over the years, the famous French fashion designers have always been at the forefront of the fashion industry, and by all means, it looks like the trend will continue well into the future.